We’ve written many articles on the places asbestos hides in your home, how being exposed to asbestos can cause health problems, and why you need to have your home checked for asbestos especially if you’re planning renos. However, we don’t often discuss just what asbestos is. It’s important to remember that there are several types of asbestos, but since white asbestos is the most frequently used, we’ll be focusing on that for this article. 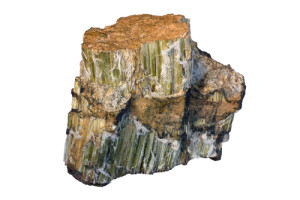 Physical Properties are just one of the ways we describe the rocks and minerals found on Earth. White asbestos is described as having a hardness similar to the human fingernail. It scratches and crumbles easily. This is one of the reasons asbestos is dangerous. When the mineral crumbles, it breaks down into tiny fibers that get lodged deep within the lung. Other physical characteristics include its resistance to heat and electricity. Asbestos is also an excellent acoustic insulator.

The Chemical Properties of asbestos mostly revolve around how unreactive it is. It does not dissolve in water nor does it react with strong bases (cleaning agents such as baking soda, soap, and bleach are bases on the pH scale). Acids on the other hand, can damage white asbestos though other forms of asbestos are less vulnerable. Asbestos also remains very unreactive even at high temperatures. In fact, you’d have to heat it to over 550°C before seeing any instability.

The Earth is a very interesting place and there are a huge variety of really interesting minerals and substances that occur in nature. Pumice is a volcanic rock that floats, diamond is one of the hardest substances known to man, and asbestos is one of the most useful and deadly minerals still used. If you want to learn more about asbestos contact the experts at Amity Environmental today at (587) 892-7920.