Have you ever picked up your dish cloth or sponge just to be surprised by a rank smell coming from it? That’s mould. It’s likely too soon to see any black (or other coloured) spots growing out of the cloth, but your nose can already detect the growth. While mould growth in the walls, basement, and attic might be what most people are worried about, mould can grow anywhere. 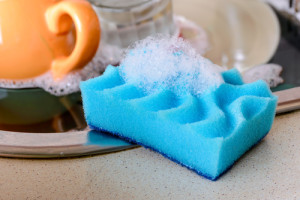 Dish Rags & Sponges. They’re given a constant supply of water and are often left in a heap on the counter by kids. Given that, it’s not surprising that dish rags are a mould haven. You can help prevent mould growth and smelly dishcloths (and hands!) by using thin rags that dry quickly. If you have a large supply of dishcloths, it can be a good idea to swap out the rag every other day or so. As for sponges there are two options. Most sponges can handle a vinegar bath for a few minutes and doing so should remove most of the odor. If your sponge can handle high heat, boiling it for several minutes should kill any fungi.

Towels. Pool towels, bath towels, dish towels. It doesn’t seem to matter where a towel is used in the house: it still gets smelly. The best way to avoid this is by having adequate hanging space. You’ll want to hang a towel as soon as you’re finished using it, and be sure that it’s spread out and not overlapping anything else. Like the dishcloth, swapping out an old towel for a clean one from the cupboard every couple days will also help. It’s also a good idea to not store your clean towels in the washroom or laundry room where they’ll get damp.

Washing machines. Nothing is quite as annoying as throwing in a load of laundry and coming back an hour later to find it smelling musky already. Likely, the smell is coming from your washing machine. Front loading washing machines have many parts and some of them can remain damp after the machine is used — this is especially true if anyone in your family leaves the door shut when the washing machine is not in use. Fortunately, you can probably fix this nasty smell yourself. First check if your washing machine has a tub cleaning or self cleaning cycle. If it does, use that and follow the instructions in the manual. If not, try tossing a cup of baking soda into the drum and turn on the longest and hottest cycle. The baking soda and hot water should take care of your mould problem. If the smell persists, there’s likely a more complicated problem that might need the help of a repair man.

Nobody likes the idea of mould growing on their dishcloths or in their washing machine. We hope these tips can help you keep this smelly fungi out of your life! If you have any questions related to mould in your home, call Amity Environmental today at (587) 892-7920.