Before we begin, we’d just like to say that there are actually six different types of asbestos. The two we’ll be discussing today are just two of these types. 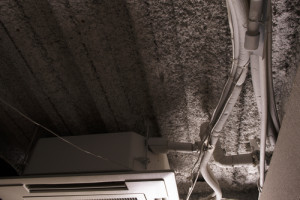 Asbestos refers to naturally occurring minerals made from silicate with a long, fibrous crystal structure. Each of the six types has a unique colour which also gives it its common name. Amosite or brown asbestos is generally agreed to be one of the deadliest forms of the six; chrysotile or white asbestos is accepted as the least damaging. These two forms of asbestos are the ones we’ll be discussing today.

Amosite or brown asbestos is actually named after the historical acronym AMoSA standing for Asbestos Mines of South Africa where the vast majority was found. During the height of asbestos use, brown asbestos was used second only to chrysotile. Used mostly in commercial buildings and factories, amosite was a highly effective flame retardant, unreactive to most chemicals and conditions, and had anti-condensation properties. These characteristics made it a popular choice for thermal insulation and ceiling tiles. Because of its nasty, carcinogenic effects, it is no longer mined and has been outlawed nearly world-wide.

Chrysotile or white asbestos is the most common form of asbestos. Both today and in the past it occupies nearly 95% of the market, giving it a huge lead on brown amosite which is used for just under the remaining 5%. The fibers of chrysotile are different than those of amosite, and because they don’t get trapped deep within the lungs, chrysotile is slightly less carcinogenic than brown asbestos. However, it’s fibers can easily still become lodged in the higher portions of the lungs, and research has conclusively argued that white asbestos is the leading cause of pleural mesothelioma. Canada’s history with the mineral had been unrelentless loyalty during the numerous years that the government was able to export it to developing nations. While the Canadian government still claims that white asbestos is significantly less dangerous that brown asbestos, all of the asbestos mines in Canada are closed at this point.

It’s hard to ignore Canada’s conflict of interest in its insistence that white asbestos was safe despite tons of research from almost every other western power in the world. Some of the claims the government made, such as it being safe to handle with the right training and equipment are true though. At Amity, we rely on these everyday to keep ourselves safe. Unfortunately, when asbestos is disturbed in a home, the homeowners rarely know it’s happened, and they certainly don’t start wearing the necessary equipment. That’s why we believe in helping all Calgarians remove asbestos from their home. Not having asbestos is the only way to know you’re safe. Call Amity Environmental at (587) 892-7920 and have your home tested for asbestos today!