Because of the extra humidity that comes in waves of rain and snow melt, spring is often a prime growing time for mould. Fortunately, it’s also the time of year when most people are ready to do a real thorough deep clean that should stop any mould growth before it begins! So while you’re in the midst of your spring cleaning frenzy, don’t forget to give these locations a look for mould growth or water damage! 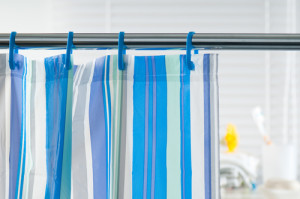 Shower Curtains. While it seems almost counterintuitive that showers need to be cleaned at all since that’s where we get clean, anyone who’s moved out on their own knows that they do indeed need a scrub. The shower curtain on the other hand often gets quite a bit of neglected. In fairness, it can also handle quite a bit of neglect, but if left too long, it may begin to develop a mould problem. This is especially true of vinyl, nylon, and cloth shower curtains. Since they’re often damp at least some of the time, if they aren’t given an occasional wash, problems logically begin to happen. Fortunately, once every half a year should be plenty to nip any issues in the bud.

Major Kitchen Appliances. It’s no surprise that major appliances like fridges and stoves don’t get moved very often. They’re heavy! It’s often a huge pain the bum to move them. However, it’s probably a good idea to add cleaning behind and under them to your spring cleaning list. With this once a year scrub, you can make sure there isn’t a hidden water or mould problem developing that’s hidden behind your appliances. Remember to give the area around your dishwasher a glance over too!

Plants. I know, they’re cute and cheerful little companions that freshen the air and liven the decor, but the fact is plants are often not wiped down as frequently as they should be. One of the reasons you should be wiping dust off your plant is just for the plants benefit. Too much dust could clog is air intake. However, plants are also magnets for many types of mould. Giving each leaf a quick wipe will help to keep any pests to a minimum, and that’s better for you and your plant.
Mould loves growing in unexpected places where it can spread without being noticed. That’s why it’s important to always be on the look out for water damage or mould spots everywhere in your home. If you find mould or a leak in your Calgary home, the experts at Amity Environmental can help! Give us a call at (587) 892-7920.