There are a ton of Do It Yourself kits for just about everything these days. You can buy DIY crown mouldings and DIY legal wills, but when it comes to solving mould problems, it might be better to do some DIY research and call in an expert. 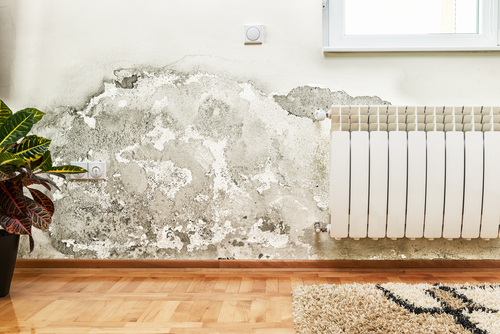 The problem is mould isn’t surface level. It’s a part of the fungus kingdom and where you see a couple spots of black or white, there’s an entire network of mycelium beneath the surface. Mycelium is the massive, branching, thread like part of a fungi. You can think of it as being similar to the roots of a plant. If you cut a dandelion but leave the roots, pretty soon you’ll have another dandelion. The same is true with mould. Wipe away or kill the fruiting body and more mould is quick to follow.

When you call Amity Environmental for help, we make sure the mould is removed effectively, and we’ll work with you to make sure it won’t come back.

Instead of just using bleach or a fungicide on the surface, we’ll scale back your walls and remove any pieces of drywall, insulation, etc that have become contaminated. These materials will be replaced later. Removing all the mould and mycelium is important, but what’s even more vital is figuring out what caused the mould to grow in the first place.

Mould requires three ingredients to grow. It needs a food source: the paper on your drywall and even the paint will serve this purpose — which is why repainting over mould doesn’t work. It needs to be not too hot or too cold. Unfortunately moulds and humans like similar temperatures, so that’s a hard factor to control. Finally, mould requires moisture. High humidity rooms like washroom, kitchens, and laundry rooms are likely candidates for finding mould. But if your roof or sink has a leak, it could be found anywhere in your home.

Before we leave, the experts at Amity Environmental work with Calgary homeowners to explain what caused the mould growth. Perhaps a cold room in the basement had water condensing onto it or the steam from your shower wasn’t venting properly. We’ll also discuss how to fix that problem — additional ventilation, better insulating, or installing a dehumidifier are common remedies — so that mould doesn’t develop again.

Removing mould isn’t a one step process. It need to be identified, abated fully, and the cause fixed. There are a lot of great DIY projects, but mould removal just isn’t one of them. If you suspect that you have mould growing in your Calgary home, call in the professionals at Amity Environmental.